How to Make An Impact When Building a Thought Leadership Brand 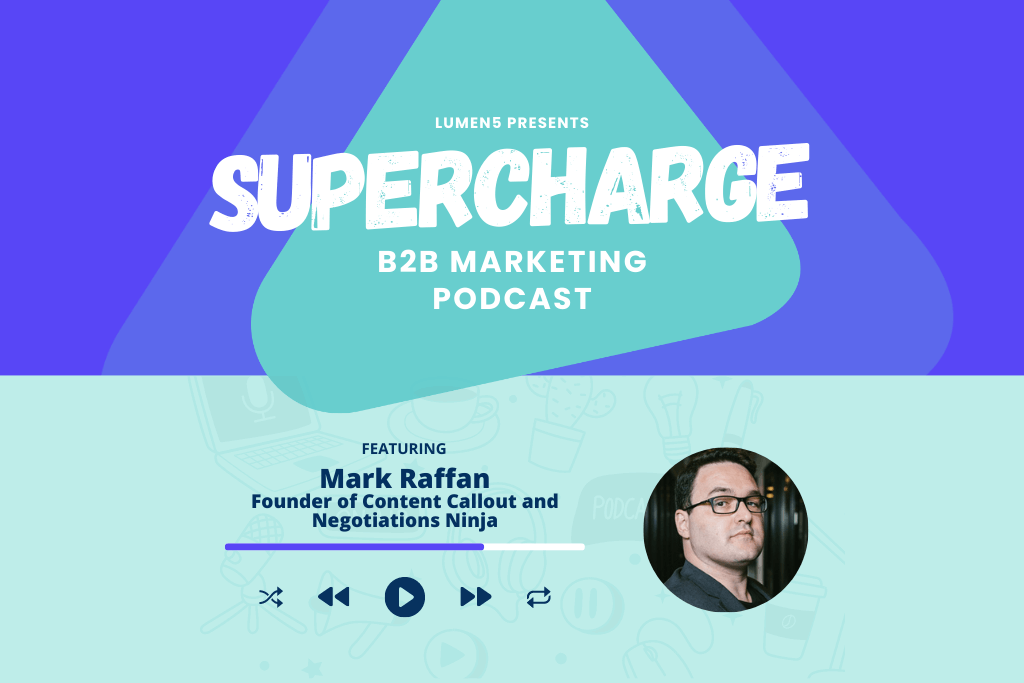 Thought leadership isn’t just a buzzword. Getting it right and properly harnessing its power can take a brand to the next level. However, where should companies start?

“Anyone that’s thinking of developing a thought leadership brand: What I want you to start thinking of is, what is the thing in your industry that you would chop down with a sword?” Mark tells Lumen5’s Dani Hao in this episode of Supercharge Marketing.

His strong background in negotiation also led him to realize that marketing offered the opportunity to influence and gain the trust of more than one person at a time — thousands, in fact. Having coached executives and teams in some of the largest companies in the world — including Zendesk, Nike, Citibank, the Sasha Group, Salesforce, the U.S. Army, LinkedIn and Humana — Mark has learned that sometimes stirring the pot is the best course of action.

“If someone disagrees with you, that is fantastic. That’s like best-case scenario: Lean into it, have the debate, have the conversation. As long as it’s polite, who cares?”

Tune into this episode of Supercharge Marketing to gain insight into why the only way to become a thought leader is to go against the grain, the two rules of creating (desirable) controversy, and how distribution is just as important as production in content marketing on (and off) social media.

Exposing industry lies is the building block of a thought leadership brand.

To build a brand beyond buzzwords, Mark recommends rooting out the incorrect orthodox view and chopping it down with a sword.

“You would think that your reach is reduced,” he explains. And while it’s not as broad, the depth of engagement is so much higher. “When they consume your content, it’s not just a cursory glance — they actually consume it [and] start to absorb it.”

Social media marketing is very powerful — if leveraged in the right way.

Thought leadership content can be both intellectually rigorous and fun to consume at the same time, Edelman found. “If you’re going to challenge someone in your industry, and you want them to actually read your stuff, it has to be out there,” Mark says. “Not just producing it, but distributing it.” The company page, thought leaders, employee influencer marketing efforts, and paid distribution are all gateways for proper social media marketing.

Gartner reported an 80% move to digital B2B sales interactions. “If you’re not controlling the narrative out there in the marketplace … to control the influence and persuasion of your target audience … there’s so much opportunity that you’re missing out on,” Mark says.

Influence and trust are two key ingredients of both negotiation and content.

Most importantly, the fundamentals of getting someone to do something are so similar. “All we did was take the principles in negotiation and try and apply them as best we could to the principles in marketing,” he says. “And lo and behold: It’s worked.”

💡 Thought leadership is not just a buzzword.

💡 Going against the grain pays off in the long run.

[05:00] “We also started thinking about what are some things that go against the grain of the industry that most people secretly agree to, but most people won’t say out loud. And so for us, when we thought about that … it was the whole concept of win-win negotiation — which we think is the biggest lie that’s ever been told in the negotiation world. We think it’s nonsense.”

💡 Taking an opposing stance is down to two things: what to avoid and what to lean into.

💡 Content creation is important, but distribution is crucial for it to work.

💡 Debate and disagreement are opportunities — don’t avoid them.

🚀 Learning from our mistakes is all part of the process.

Everyone in every industry fails at some point in their career — sometimes significantly. But it’s always a learning opportunity. 💥 What he does: Founder (and host) of negotiation podcast Negotiations Ninja™ and content marketing agency Content Callout.

🧠 Mark’s big idea: “Anyone that’s thinking of developing a thought leadership brand, what I want you to start thinking of is, what is the thing in your industry that you would chop down with sword?”

This episode of the Supercharge Marketing podcast is available to listen to on all main streaming platforms including Spotify, Apple Podcasts, Google Podcasts, Amazon Music and more. Listen here.

Enjoyed this conversation? New episodes every 3 weeks! Hit subscribe so you never miss an episode, and follow Lumen5 on LinkedIn for future updates! #SuperchargePodcast 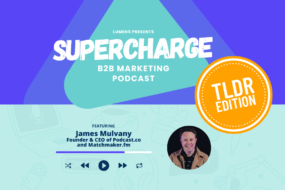 The Future of PR: How to bypass the traditional channels and stand out Virtual Events as the New Normal: How to build a successful event and drive pipeline